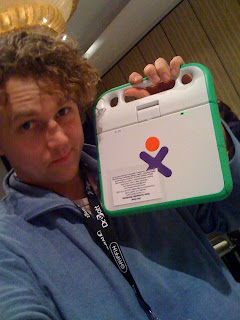 yes, of actually exists, and yes it is an amazing little device. a
nice guy at the consultants' networking event had one and he let me
touch it and game me a demo.
my first impression was amazement at how small it is. truly a kid's
computer with a tiny keyboard. the Linux interface is very cool and
simple… it can even run multiple programs at once!
thus guy, by the way, paid $400 in the deal for westerners to get
two for $400… which let him keep one and then they sent one to a kid
somewhere…

So if you're a hobbyist and have enough money and heart you should get
one too!