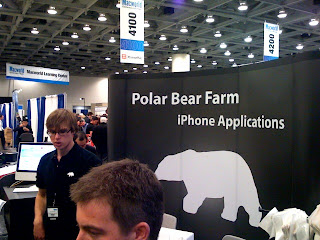 I read somewhere that this journalist wanted to do a story on iPhone
app developers and whether they had the balls to exhibit at
macworld… and well it turns out that at least one of them does!

pretty cool stuff they make, too.
check them out at polarbearfarm.com

unfortunately you still have to be using iPhone software version 1.1.1
to install these illicit apps but I'll be looking to these guys when
apple officially supports them in February.

until then, know that you CAN get search on your iPhone and even a video capture program… wild!